Coming from the rough and tumble south Chicagoland small town of Kankakee, Corey McCue aka Munk Julious found his salvation through music . At the age of 3 he found his love for piano at a church daycare his mother would drop him off at before her work day started. In his teenage years like most youth in the economically deprived areas of his community, he was on a path detrimental to his existence .

His cousin was a Dj who was making a name for himself in the community as well as the south Chicagoland area. It was at that point that a young Munk Julious found his calling and what would later after some tumultuous years become his career. In 2003 he was offered an opportunity to move to Chicago and takeover an apartment by way of Bill Torres aka Mystic Bill Founder of Vibe Alive who then introduced him to the key individuals that would play a MAJOR role in who he would later become.

Munk Julious is the product of influence from Mystic Bill, Chicago Legend Paul Johnson as well as Julius the Mad Thinker, Dj Greg Norwood, Paul Anthony and Mel Hammond those who have paved paths for many of todays artist . In 2013 Munk Julious met Sheree Hicks And Sean Ali – all of them sharing the same views and ambitions and each of them having the key elements needed in successfully executing their musical endeavors .. 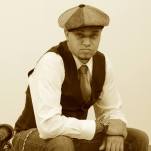 From this trifecta two labels formed Sounds Of Ali and Later Sheree Hicks own imprint Chic Soul Music, as well as their main production facility Axes Music Group formed by Munk and his longtime engineer and family member William ” Tedious Will” Richardson, which serves both Chic soul Music And Sounds Of Ali as well as many other clients . When asked what formula was it that brought you all into becoming household names in your genre, Munk simply responds “Instead of living in the realm of dreams of grandeur or self entitlement we focus solely on the art and task at hand to complete said art /project.” “we don’t go into any concept with expectations other than to create the best outcome possible – wether its videos, music or photos we give our absolute best always and with raw emotion and genuine ideology.”

Munk Julious has become known as quiet force. A man behind the curtain that goes above and beyond to bring concepts and ideas into fruition for his “camp” and or musical family.