Music is water for the soul

George Freeman is a music chameleon with Greek origins who is capable of composing and producing any music style in order to deliver his unique vibe and artistic feeling each time. Influenced by all the good music elements from soul, classical, jazz, funk, soul, hip-hop, disco, breakbeat, rock, reggae-dub, retro-pop, progressive, deep, cinematic and the list goes on. 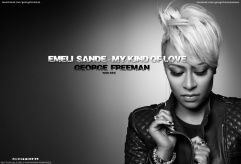 He has worked as a soundtrack composer for film and theatre and he has also composed jingles for TV and Radio. He did his practice as a sound engineer working for the main national Greek TV/radio station in Athens. In Addition he did some very good gigs combining DJing and live programming/keyboards with great success. His tracks are going pretty well in big music charts since his first official releases and his tracks tend to be remixed again and again and being included in numerous music compilations already,so there are more than meets the eye to expect…