It’s not about how WELL you sing. It’s how you FEEL about what you’re singing

Yes, Tommie is her real birth name–after her grandfather Thomas…

Born into a military family just outside Houston, Texas in the 60’s. One of five siblings, but was raised–along with her older brother– by her mom’s family mostly in Columbus, Ohio.

By the age of 7, she was already playing the organ by ear, helping her mom rehearse her church solos, and perfoming in the Childrens Choir. The love for performing only became stronger during the teenage years, cheer leading for 4 years in High School, while dabbling in music and The Children’s Theater group.  She then attended Ohio University, taking electives in Music Theory and Theatre, where wanting to be an entertainer became her new dream.  With no serious formal training–and instead of graduating and taking over the family child care business–she decided to hit the road with countless bands as a stage performer. This led her to joining the all-female group EVE, where she received her first national recording contract with The Music Store/Ichiban Records.

Since leaving the business in the 90’s to raise her son (and career detour, during battling Stage III Breast Cancer in ’03-’04), she has performed and recorded with countless bands and artists in her town of Columbus, Ohio.  In 2012 she stopped answering the musician want-ads to work just as a ‘hired gun’, of just singing whatever-wherever as income.  It was then she realized that ‘what’ she sang and how she ‘felt’ about the music, was more important than the money paid to do it. This new paradigm set her back on the road to original songwriting, and pursing labels to release her songs. 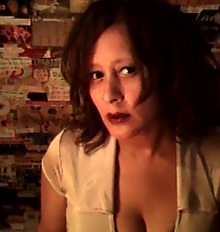 Her immediate goals in music are to nurture and inspire others–by composing and performing songs about life lessons that we all share. Presently, she is focused on making original productions and mashup/remix covers–in her home studio–collaborating with partner, Producer OskiDJ of Barcelona, and the Unique2Rhythm UK label. Her bigger longterm goals are to perform/tour internationally, plus to create and/or manage other Artists–by building her own entertainment label from revenue in songwriting endeavors.

“I’ve always admired vocalists who give you everything they have. Where you can hear the pain, challenges or triumphs come out in their interpretation of the lyrics. Not holding back passion in a cry or scream, for the sake of making their sound glossy and perfect for radio.” 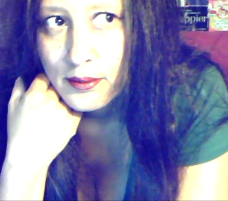 Her current favorites are a roster of some of the best vocalists from the U.K., such as Joss Stone, Annie Lennox, Alison Moyet and Katherine Ellis. Her American favorites include the sounds of Concrete Blonde, Heart, and Mothers Finest as well as guitar-mamas Melissa Etheridge, Sheryl Crow, Sass Jordan and Joan Osborne. With regards to her own talents, she uses the slogan “Everything from A to Z: Aretha to Zeppelin”. This is why each time you hear her voice, you will receive a new experience.