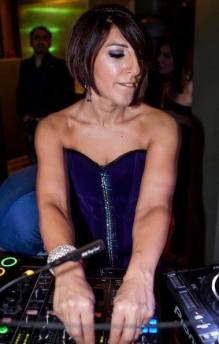 DJ Selva Basaran was first inspired by her father who enjoyed playing records at home on the weekends and secondly after a break up with a loved one.It was due to this separation she chooses only to play music that speaks and feeds the soul on a more profound level. Also her friends gave her a big nudge to play when they discovered that she had good musical savour plus mixing capabilities when she began playing for fun with local DJ’s in a few small chic venues in Istanbul.

Soon she found herself DJing in the high society arena in both public and private gatherings. It was 2006 when she gave her first live performance as warm up artist for guests DJs in the popular club/restaurant 360 in Taksim. In 2009 she began to show a great interest and admiration for Jamie Lewis producer and owner of Purple Music Records.
In the 2010 in Turkey she was nominated best lounge Dj in ‘Wedding Magazine’, July’s issue. 2013- 2014 she is spinning in Switzerland,Italy,Ibiza,England,Turkey

She has been and continues to be in the lineup of world famous djs who appear as guest Dj for live radio programs such as Canale Italia Radio since 2007, Dublin Fm Radio in 2010, Beatwinus Radio Paris since 2011 and Audio Bite Records Radio Show which commenced year 2012.